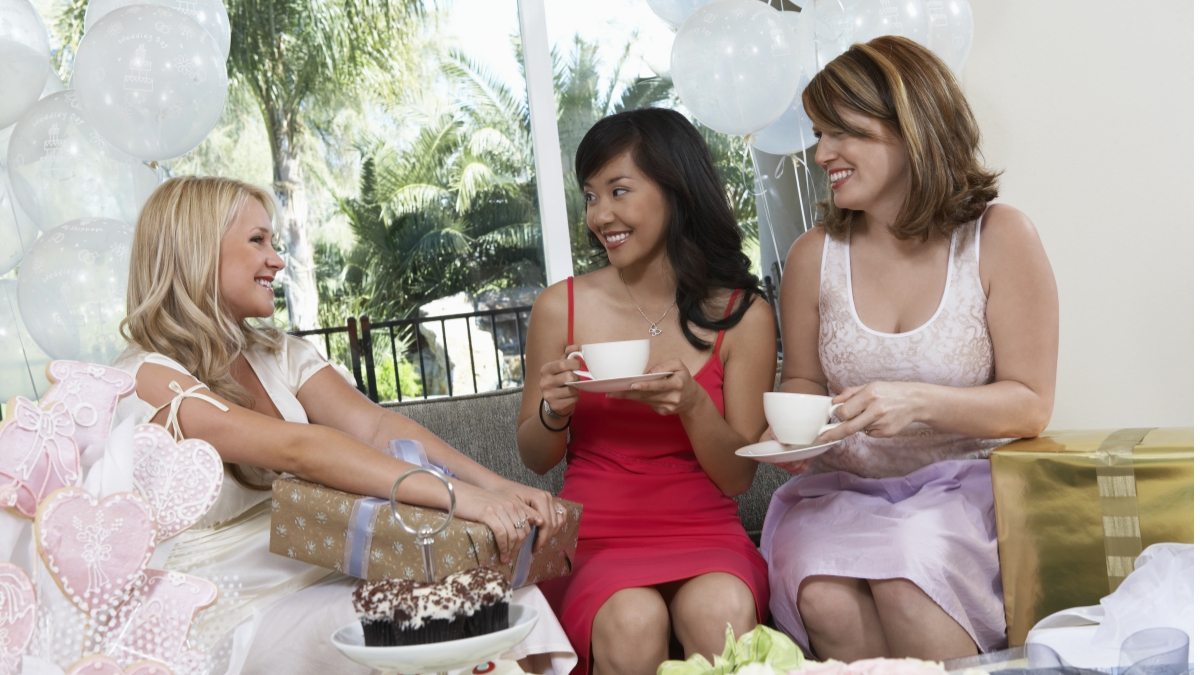 What is a bridal shower? Well, to answer your question, it is a party. It’s usually held in someone’s home- more often than not it will be yours. At a bridal shower, guests bring gifts for the bride. Most of the time, no men are allowed, and invited family members can consist of Mom, Grandma, and other female relatives.

Don’t confuse it with the bachelorette party. The latter is the bride’s farewell to single life and may involve excessive indulgence in drinking alcohol in more than one bar or pub.

Bridal showers are just a touch tamer…although getting wine-weird is a very real thing!

A bridal shower is a get together of people close to the bride. If you’re hosting, request the presence of only those who are invited to the wedding.

If you’re hosting two showers, check with the bride who she wants to be invited to the second one. Regardless, whether it’s one or two parties, make sure it will be entertaining. And, this means games played at bridal showers.

There are many games to play at bridal showers, but we recommend these three specifically because they have a very high success rate at most parties:

A scavenger hunt is a game where people try to find all the items in a list. As the name suggests, things only need to be found in a person’s purse or bag.

Participants don’t need to get up and look around the house or the party venue, so even the older crowd can join the game. Don’t be surprised if Grandma winds up being the big winner!

If your grandma is anything like mine (whose purse contents were so extensive that she could probably pull the first draft of the Missouri Compromise out of her purse if someone were to randomly ask her for it) then you should actually expect this.

Before the bridal shower, make an amusing list of items that include the common and the weird. Your list could have as many as a hundred things.

Start with the most common stuff found in women’s purses, like…

These are just a few of the basic items that can be on your Purse Scavenger Hunt list. But if you want to make the game more interesting, include unique items such as the following:

We’re sure you can think of more weird objects women tend to carry in their purse. Mothers usually do well in this game when it involves uncommon things found in their bags. Even they are amazed when they find out they’ve been carrying for a long time strange objects like a rock probably placed by her child.

Sure, it’s adults-only at a bridal shower. However, I still advise you to ixnay on the items of a more sexual nature, like marital aids, birth control, etc. Not everyone at the party will find these appropriate for a purse scavenger hunt. Besides, you can have a lot of fun with just a list of the simple stuff.

Play the game the old-fashioned way. The person who has the most items wins. Or, you can assign points for each item but give the highest for the unique stuff. Who gets the most points wins.

You can also opt to start with a simple list designed to eliminate players until only two or three remain. Prepare two or three sealed lists that are different from each other. Ask the remaining women to pick one. Again, based on each individual’s list, whoever has the most items, wins.

For prizes, what about stuff that a woman can put in her purse. Make sure though it won’t get her into any trouble when going through security. Consider giving the winner/s a set of colored safety pins in a charming small pouch, a hand sanitizer made of natural ingredients, or a mini stain remover.

Add your creativity to the game. It can be animated or even loud, but make sure it’s tailor-made for your guests. If you don’t know everyone, ask the bride about the women who are coming to the bridal shower. Who knows, even grandma might be game for a little bit of naughtiness.

How well does the bride know her fiancée? This game requires you to send the groom a set of questions. Even if he agrees or encourages it, don’t include ones that might embarrass the bride. For instance, there should be no questions about spending a night together. Ask fun questions, but keep ’em clean.

Here are some examples:

You know the bride and the groom better, so add to these more specific questions that come to mind. Take note – The groom might give answers that are not necessarily true in the spirit of fun.

If you or someone you know is tech-savvy, why not make a video of your interview with the groom? There are many free editing software you can use, which can add music, photos, and special effects. After the bride has answered a question, play the video showing the groom’s answer.

Depending on the number of women at the party, this game can be a contest among individuals or teams. Be ready with printed sheets of scrambled words, pencils, and pens.

Or, if you have a whiteboard or some other similar alternative solution, why not write a scrambled word one at a time? Make the game more engaging by having people guess aloud.

Choose words that are related to dating, wedding, marriage, and family. You can find many sample lists on the internet. A lot of these are printable. To give you an idea, here are some words:

Don’t be surprised if someone at the party insists on a word not yet added to the dictionary. Sometimes, it’s the effect of a little too much alcohol. But, coining new words can be a source of laughter for guests.

If you are using a whiteboard, you can give hints by drawing pictures. Hey, you can combine a bridal shower unscramble word game with both Charades and Pictionary.

“Charictionary”. Or maybe “Parades”, I guess.

Some of your guests may think bridal shower games are silly and, therefore, unnecessary. But, with the right games like the three above, your guests will have fun. They’ll go home with memories of a beautiful afternoon or evening.

Split your guests into groups of three or more. Break up people who know each other. Better yet, form teams composed of women who are meeting for the first time. Playing games is an excellent icebreaker for them.

Encourage (or insist, if you have to) that the not-so-young guests participate. When you ask everyone to join, don’t accept excuses such as “I’m too old for that.” Even the elderly can have fun with these games.

Try to Channel Your Inner Game Show Host or MC

Surely, you’ve seen at least an episode of The Price is Right, Jeopardy, and Hollywood Game Night. To keep the energy up and the party going, you’re going to have to play the part. Check out this article, which talks about the most successful game show hosts and why they’re successful!

If you make preparations well in advance, put your guests at ease and make each feel important, you’re going to kill it at being a game show host. You’re throwing a party, which means you’re sociable.

Having three games or more lined up doesn’t mean you have to hurry. Let each game unfold or evolve naturally. You’ll know when a game has lost its charm. That’s the moment to introduce a new one.